The Block analyst Larry Cermak, in the comments and charts, reflected the evolution of the crypto industry after the end of the previous rally in late 2017 – early 2018.

1 / It’s hard not being optimistic when looking at what’s been happening in crypto in the last few months. Narratives are important but data always tells the story much better. I spent a long time to put together this thread to illustrate the growth so please spread it!

According to the analyst’s observations, the monthly trading volume in the spot market is $ 1 trillion. The indicator has tripled from the 2017 peaks. 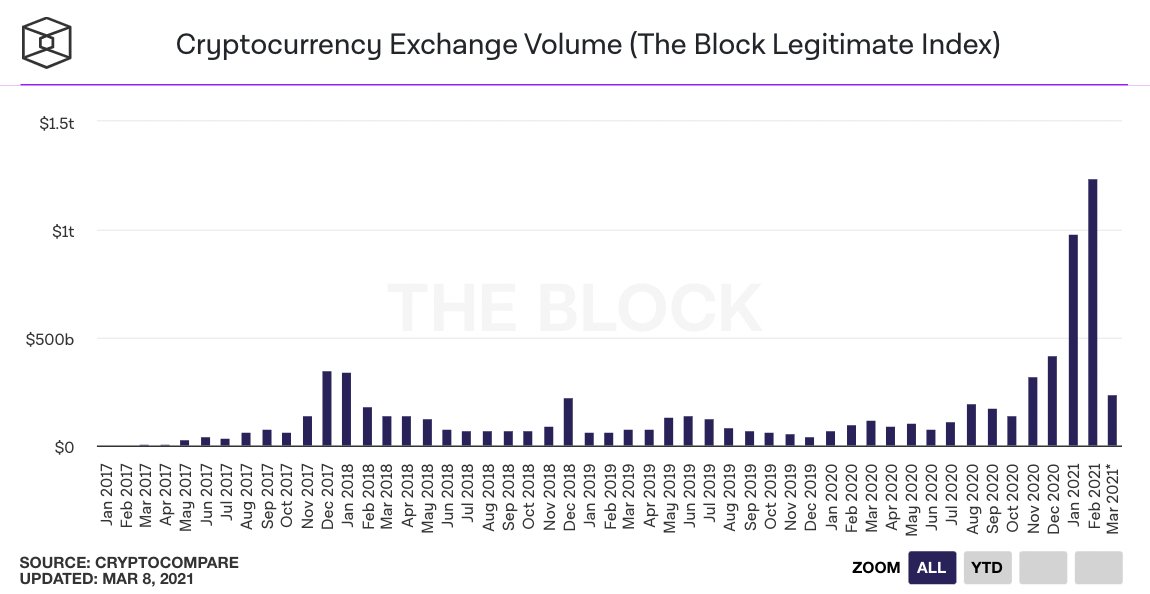 The dynamics of trading volumes on trustworthy bitcoin exchanges. Data: The Block.

Trading volume on decentralized exchanges (DEX) reached $ 73 billion – 7% of the figure from centralized platforms. Uniswap holds the leading positions with a share in the segment of about 50%. 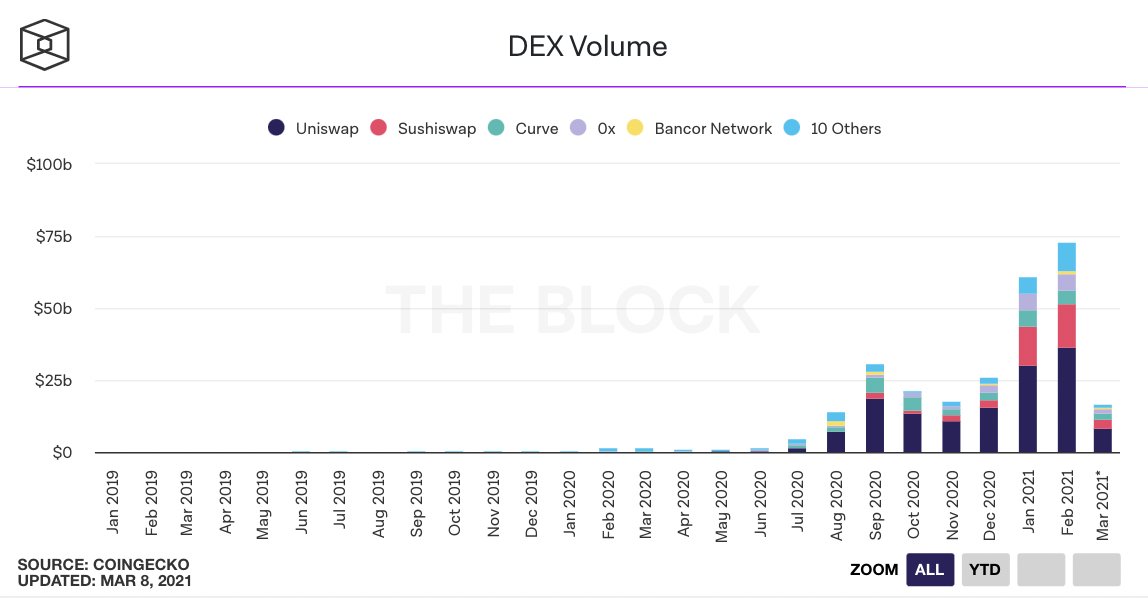 Dynamics of trading volumes on DEX. Data: The Block.

Unlike the events of three years ago, institutional investors played a large role in the rise in quotations.

In February, web traffic to exchange sites was 20% lower than in January 2018. The activity on Twitter related to cryptocurrencies has also decreased. The number of searches for the word “bitcoin” to date has not reached the figures recorded at the peak of the previous rally. Ethereum-related metrics have surpassed those of the past market peak.

The similarity with the bull market of 2017 can be traced in the prevalence of bitcoin both in terms of trading volume (it is three times higher than that of the second largest cryptocurrency in terms of capitalization) and in terms of liquidity by the same amount.

In the bitcoin futures market, open interest quadrupled in three years – to $ 15 billion. The volume of trades in this segment ($ 2 trillion monthly) is approximately double that of the spot market. 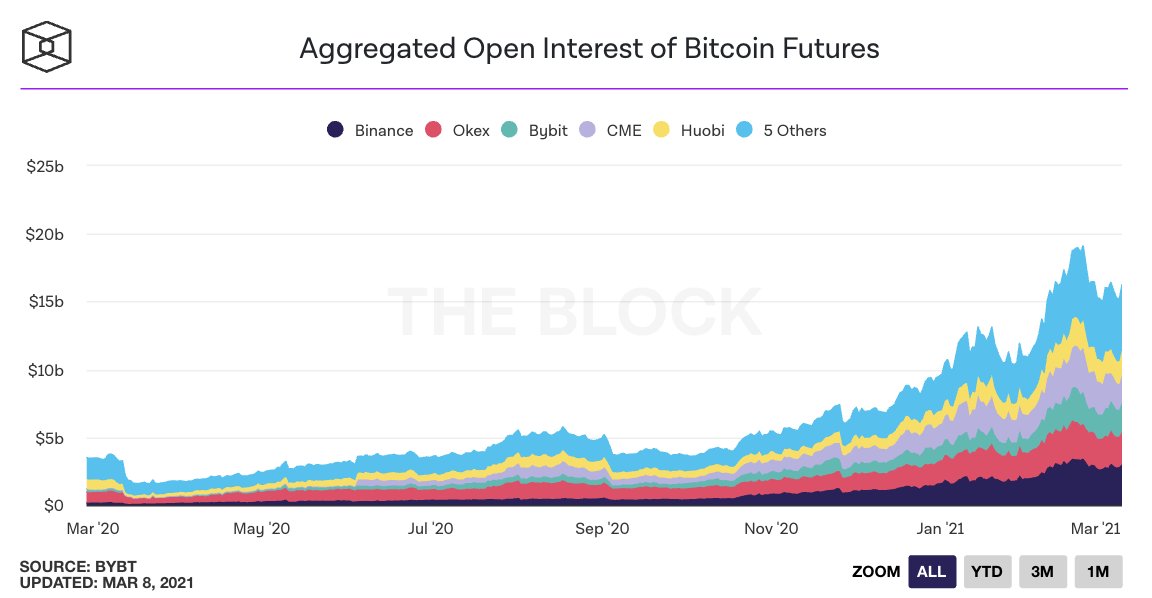 Dynamics of open interest in bitcoin futures. Data: The Block.

Chermak also drew attention to the role of the bitcoin options market in predicting the benchmarks for the value of the first cryptocurrency. This was made possible by the increased activity in long-term contracts. According to him, open interest in options is approaching the indicators of the Bitcoin futures market (~ $ 10 billion).

Crypto assets in Grayscale Investments trusts reached 655,500 BTC and 3.17 million ETH. The company generates about $ 70 million monthly in fees from investors. Due to the emergence of competing offers and market correction, the premium of the bitcoin trust to the spot price of the first cryptocurrency fell to negative values.

There are 1.1 million active addresses on the bitcoin network every day, versus 500 thousand in Ethereum. The daily volume of transferred value is $ 10 billion against $ 7 billion, respectively. The daily income of miners in both blockchains increased to $ 50 million. 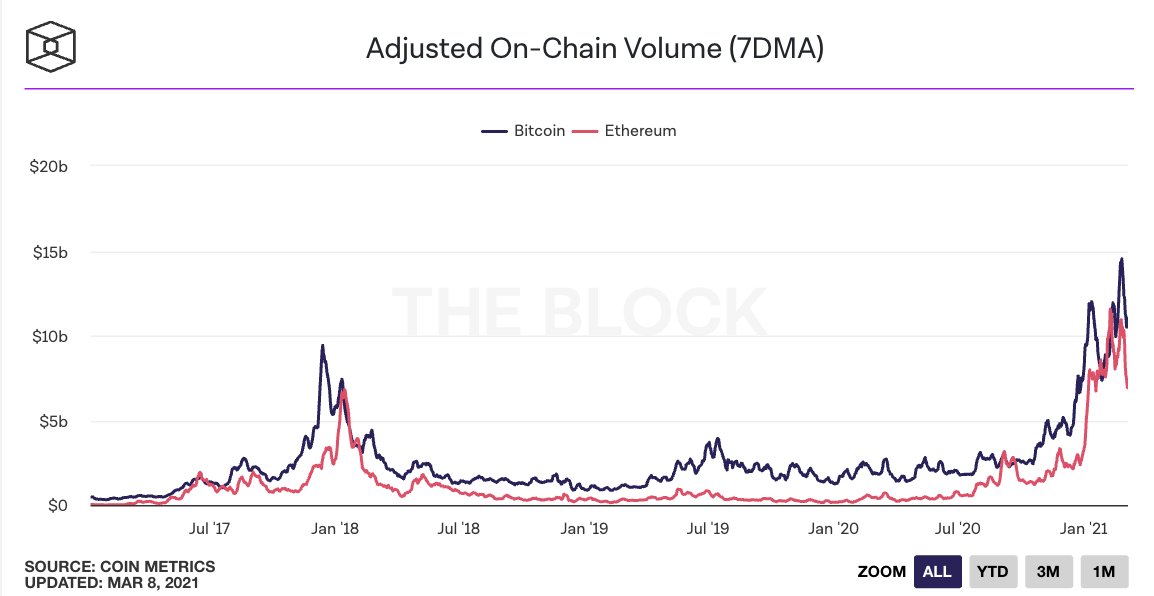 Seven-day moving average of the daily value transferred across the Bitcoin and Ethereum networks. Data: The Block.

The total market supply of stablecoins has exceeded $ 50 billion. The volume of transactions made with stablecoins in February reached $ 380 billion – three times more than a year ago.

The NFT marketplace NBA Top Shot recorded 350,000 users. CryptoPunks only had 1,200 of them, but due to the high prices for NFTs, it also maintains a leading position in this segment. 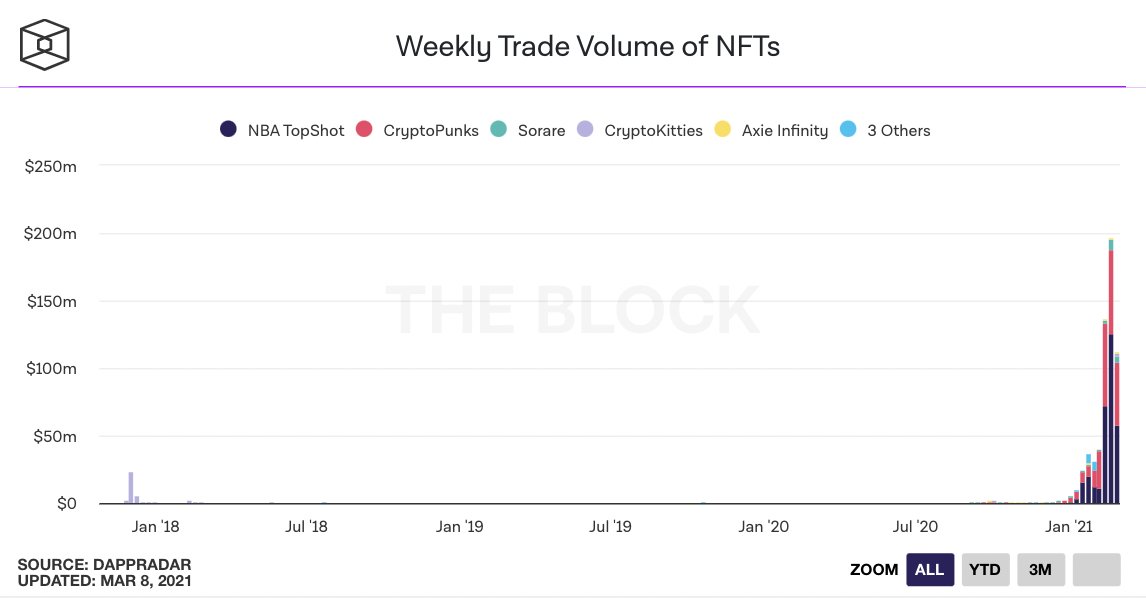 Recall that from February 4 to March 4, the trading volume in non-fungible tokens amounted to a record $ 480 million .

Read about the main events of the last month in the ForkLog review “February 2021 in numbers: $ 1 trillion of bitcoin capitalization, the rise of the Binance Smart Chain and the NFT ecosystem.”